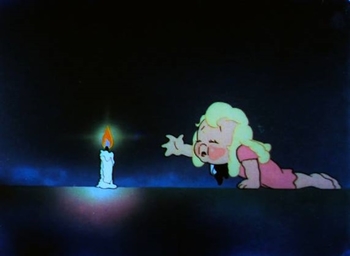 The Little Match Girl is a 1937 animated short film produced by Charles Mintz and directed by Arthur Davis.

It is, no prizes for guessing, an adaptation of Hans Christian Andersen's short story "The Little Match Girl," though it takes place in a comparably more modern setting than the original.

It's New Year's Eve in (what appears to be) New York City and revelers are out at midnight celebrating the New Year. None of the people out drinking and partying seem to notice a little girl who's clad only in a ragged dress, walking around barefoot in the cold, snowy winter. Some even cruelly heckle her. The little girl is trying to sell matches, but nobody buys any—the little girl is also homeless, so when she fails to sell any of her matches, she retreats back to her regular spot in an alley. Lighting the matches one at a time for warmth, she imagines all the things she doesn't have, like a warm hearth, food, and a comfy bed. Eventually she has a dream of heaven.

Compare The Little Matchgirl, a Disney adaptation of this story from 2006.