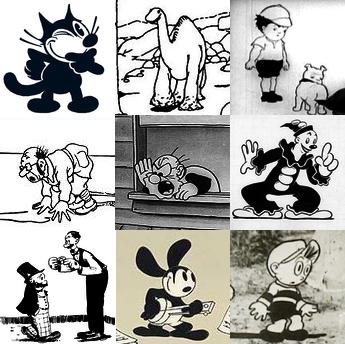 The Silent Age star ensemble. note  In order: Otto Messmer's Felix the Cat, Winsor McCay's Gertie the Dinosaur, Bobby Bumps and Colonel Heeza Liar of the J.R. Bray studio, Farmer Alfalfa of Van Beuren Studios, Koko the Clown of Fleischer Studios, Mutt and Jeff of J.R. Bray, Oswald the Lucky Rabbit of Universal, and Walter Lantz's Dinky Doodle.
"I hope and dream the time will come when serious artists will make marvelous pictures that will love and live in life-like manner and be far more interesting and wonderful than pictures you now see on canvas. I think if Michelangelo was alive today he would immediately see the wonders...The artist can make his scenes and characters live instead of stand still on canvas in art museums."
— Winsor McCay, talking during a WNAC Radio Broadcast, New York, September 1927
Advertisement:

The earliest age of mainstream animation known to man, lasting from the early 1900s to the late 1920s with the rise of sound technology.

Now, animation had existed for centuries in some form of another before this era came about, but this era is when large numbers of people actually started taking notice of the medium and what it could do. This had a lot to do with the invention of the motion picture camera using photographic film. The ancient method of painting images onto plates of glass—used since the 17th century in magic lanterns and improved by 19th century inventions such as the zoopraxiscope and praxiniscope—had a number of drawbacks. It was expensive and labor-intensive to paint the figures, it was difficult to make multiple copies, and the length of animation that could be fed through the projector was limited by the mechanical medium on which the image was stored. Thus, even though it was possible to make animations before the invention of photography or the film camera, the ability to photograph a sequence of drawings on film made duplication easier and allowed for longer, more sophisticated animations to be exhibited using a film projector.

by Emile Cohl (while there were many experiments with stop motion and drawn pictures earlier, most famously J. Stuart Blackton's The Enchanted Drawing, but this was apparently the first one to rely entirely on genuine hand drawn animation).

But in the West, thanks to men like Winsor McCay (who made Gertie the Dinosaur, the very first animated character to have any distinct personality traits, and who also practically pioneered the use of animation as we know it. He experimented with animation as an "extension" of the comics he was working on during that time period) and not to mention Pat Sullivan and Otto Messmer, who both created iconic cartoon star Felix the Cat, the cartoon industry rapidly expanded, with many new cartoon companies with their own cartoon stars and imitators popping up to cash in on the new cartoon craze.

Winsor McCay was not happy with the idea of "Assembly Line" cartoons and regarded their work as inferior to his own. This was justified, in that he spent years working on his cartoons like Little Nemo (he was also the same man who made the original comics), Gertie the Dinosaur, The Sinking of the Lusitania, and How a Mosquito Operates, which are some of the most spectacularly animated works ever seen and were masterpieces compared to the quickly, cheaply produced toons that were being rushed out at the time. Not long after cartoons rose in popularity, he left the very animation industry that he helped get off the ground in the first place.

At the time, cartoons were presented and viewed as moving comic strips, sometimes even incorporating Speech Bubbles for their dialog. Fantasy was in full vogue during this period, but it tended to have a dull, heavy-handed and literal-minded feeling to it, not helped by the primitive, stiff animation, glacial pacing and floaty motion. And because animation was so experimental at the time in its early stages, this resulted in quite a few instances of Deranged Animation, as animators experimented with the medium. Max and Dave Fleischer actually got their start off in this era, with their Out of the Inkwell series, starring Koko the Clown. During this time, the most prominent animation house was the studio of J.R. Bray, who produced many hit series such as "Colonel Heeza Liar" and "Bobby Bumps".

Walt Disney got off to a brief start in this era with his doomed Laugh-O-Grams studios and Live Action/Animation shorts collectively called Alice Comedies, but he finally found success later at Universal Studios with his character Oswald the Lucky Rabbit. However, after losing Oswald and most of his animation staff over a contractual dispute, Disney quickly left Universal and formed his own studio. He and his friend Ub Iwerks ended up creating their own Captain Ersatz for Oswald: Mickey Mouse. However, the first two shorts, Plane Crazy and Gallopin' Gaucho, were not particularly well received...and then along came Steamboat Willie, the first Mickey Mouse cartoon to have sound. Also, contrary to what is generally believed, Steamboat Willie was not the first sound cartoon-the Fleischers had pioneered sound cartoons as early as the mid 1920s, with their film Mother Mother Pin A Rose on menote commonly misattributed to "My Old Kentucky Home", and not long before Steamboat Willie came out, Paul Terry, then an employee of Van Beuren Studios, made a synchronized sound cartoon called Dinnertime. However, Steamboat Willie was the first sound cartoon that took full advantage of what could be done with sound in a cartoon (and reportedly, Walt Disney saw Dinnertime himself and proclaimed it "terrible.").

Naturally, the silent age came to a screeching halt with the rise of sound technology in the late 1920s. Disney and many other studios quickly worked to take advantage of the new technology, while former stars like Felix the Cat attempted to make the jump to sound film and failed miserably, quickly fading off into obscurity until many years later, with an ill-fated Golden Age revival during the 1930s and the iconic TV series which debuted in the late 1950s.

This era was succeeded by the far better-known Golden Age of Animation, which would last even longer and become even more influential and recognized than this era ever was.

Characters/Series associated with this era:

Tropes associated with this era: