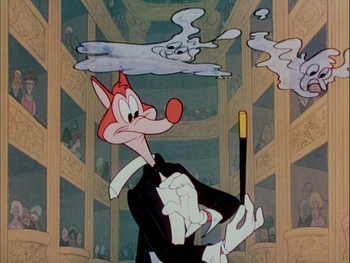 The Magic Fluke is a 1949 animated short film (7 minutes) directed by John Hubley, produced by UPA.

It stars The Fox and the Crow in the next-to-last cartoon in the series, which began in 1941. In this one Fauntleroy Fox and Chester Crow are a jazz duo playing nightclubs, whose career is disrupted when Fox gets a lucrative job offer to conduct an orchestra. He dumps Crow without a moment's hesitation.

Chester falls into poverty and is wandering the streets one day when he sees his old partner's name on a theater marquee. He gets a ticket for the Fox's show and, completely by accident, ruins it.