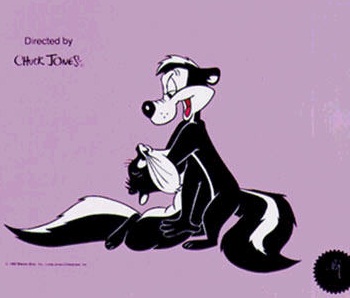 "You know, it is possible to be too attractive!"
"Pepe Le Pew is a caricature of an egotistical guy who thinks he's a ladies' man, like Johnny Bravo. The cartoons don't condone his behavior, and he frequently gets his comeuppance. If there's any moral to the cartoons, it's that if you act like Pepe, you stink."
— Cartoonist Vincent Alexander

Pepé Le Pew is one of the more famous Looney Tunes characters, although he's not quite as big as some of the other 'core' cast members of the series. He first appeared in the 1945 short Odor Able Kitty, although it wasn't until the 1949 short For Scent-imental Reasons that the standard formula for his skits were set in stone.

Standard formula consists of the following: A female black cat (whose official name is Penelope Pussycat, although she was often called by other names until Penelope was officially decided on) somehow gets a white stripe down her back either by accident, her own means, or by someone else. Pepé, being the hopeless romantic he is, would always mistake Penelope as a female skunk and try to "woo" her, despite being unaware of how strong his stench is. Naturally, Hilarity Ensues.

While it didn't have as much slapstick as the standard Looney Tunes shorts (it had its fair share, as seen in 1951's Scent-imental Romeo and 1953's Wild Over You, but mostly, it was a Romantic Comedy turned on its head, often bordering on Black Comedy, given how ridiculously luckless the female cat is in trying to escape Pepé's amorous advancesnote or, in the case of 1953's Wild Over You, how idiotic and masochistic Pepé is in pursuing a violent wildcat he thinks is a female skunk), it often made up with witty, often sexually suggestive (both for its time and now) dialogue. Not to say this guy doesn't have a fan following (Penelope sure does).

His deep French accent was inspired by Hollywood icon Charles Boyer, with some shades of Maurice Chevaliernote if you watch a Maurice Chevalier musical comedy made during the pre-Code era — 1930 to 1934 — you'll notice a lot of Chevalier's personality in the characters he plays is basically what Pepé Le Pew would come to be.