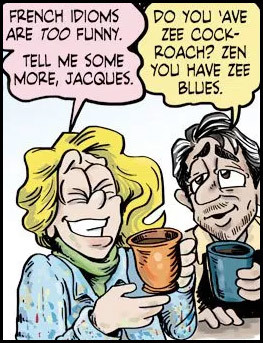 FYI: "Avoir le cafard"note to have the cockroach is an idiom meaning "feeling depressed".
"We do not even have a language! Just a stupid accent!"
"She's right! We all talk like Maurice Chevalier! Hon-hon-hon!"
— Mel Brooks' History of the World Part I
Advertisement:

Actor and singer Maurice Chevalier was the first French entertainer who became an international superstar after he moved to Hollywood. His fame and long career made him the most famous and easily recognized Frenchman of the 20th century. So, whenever comedians or even serious actors had to portray an archetypical Frenchman they imitated Chevalier's voice, which had a heavy French accent. A Stock Parody that is still in vogue today, even though most comedians and audiences have no idea where this stereotype originated from.

The Maurice Chevalier accent is a typical Funny Foreigner subtrope, especially whenever a story is set in France. All these French characters talk in the same way: "the" and "this" are pronounced "zee" and "zis". The "w" is pronounced "ooweee". Some Gratuitous French words "mais oui", "sacrebleu", "zut alors", "mon ami" or "mon chéri" are used non-stop. There's often a grotesque emphasis on the final syllable of the last word in a sentence, for instance: "Zis is veiry importààààààànt!" Chevalier's iconic "hon hon hon" Signature Laugh has also become the standard way Frenchmen laugh in English-speaking fiction.

Nowadays the Maurice Chevalier Accent is used to voice many French characters in English-speaking media. In comedy and animation this can be amusing, but in serious stories it becomes Just a Stupid Accent and can really take you out of the story, because it literally becomes ridiculous Poirot Speak. In fact, whenever a comedic accent is needed you can rest assured that it will usually be French. It gets to the point of overkill. Sometimes, like in the movie Shrek (where the British character Robin Hood inexplicably speaks English with a French accentnote This may be explained by the fact that Robin Hood was a Norman), people are depicted as being French for no apparent reason other than evoking laughs while using the accent.

The accent is a bit Truth in Television for most Frenchmen whose English is not yet that fluent, though everyone who tries to speak a language that isn’t his own will have problems mastering it. Ironically enough even Maurice Chevalier himself lost his native accent after a while and sounded more like a normal English speaking man. Only in his early Hollywood years it was very rusty, but he also played it up for the microphone and cameras, because he was usually typecast as the archetypical Frenchman and thus had to sound like an "authentic" Frenchman who didn't speak English that fluently.

Almost always applies for people who live in Gay Paree. Compare with Mock Cousteau, whenever a scene takes place underwater.