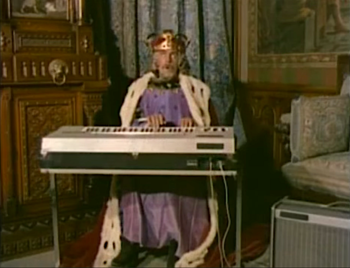 For the love of God, applaud or heads will roll!
Now get down people and listen to me
Gonna tell you how I made history
You can call me Louis, I'm the King of France
Check out my story while you do your dance
— Louis XVI, “It’s Good to be the King”
Advertisement:

Ye olde eras gone by could be rather miserable — the people at the bottom wallowing in their own filth and working day and night, the people at the top held by The Chains of Commanding, and everyone else... well, there wasn't anyone else.

The Performer King (also known as the Player King and the Acting Chief) knows how to break that monotony with a good show. He commands the masses through the power of pageant — dances with them, sings with them, makes them laugh, makes them cry when he dies on stage for the seventh time that week — and is generally well-liked for it. So long as the performance wasn't all part of some patriotic brainwashing plot and he didn't force them to attend and threaten to spear them through the sternum if they didn't like it.

In more extreme cases, kingdoms and sovereign territories may operate in "dramocracy", where the ruling class is composed of those who can entertain the people the most.

Sister trope to Benevolent Mage Ruler, Emperor Scientist, and The Philosopher King. Compare Sorcerous Overlord and God-Emperor. Not to be confused with Running the Asylum and Wag the Director.

Asmodeus is the Demon Prince of Lust and ruler of the Lust Ring, but he also owns a nightclub that he sings his Villain Song in.

Asmodeus is the Demon Prince of Lust and ruler of the Lust Ring, but he also owns a nightclub that he sings his Villain Song in.