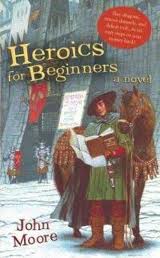 Heroics for Beginners is a comic fantasy novel by John Moore, set in his Fractured Fairy Tale 'verse, the Twenty Kingdoms.

Prince Kevin Timberline of Rassendas is smart, charming, and politically savvy. He's also in love with Princess Rebecca of Deserae. But while she reciprocates his feelings, she's determined to make the best marriage for her kingdom. Marrying for love is not a luxury the princess of a small kingdom can afford. Fortunately, Kevin has few serious competitors.

But when Deserae's precious magical artifact (Ancient Artifact Model Seven) is stolen by the Evil Overlord Lord Voltmeter ("He who must be named"), it becomes clear that whoever can rescue the artifact and save the kingdom will win the princess's hand. And, unfortunately for Kevin, his chief rival, the heroic warrior, Prince Logan, looks like the best man for the job.

It's up to Kevin to use his wits (and his copy of The Handbook of Practical Heroics) to save the day before Logan and his army can destroy the Fortress of Doom and win the princess.