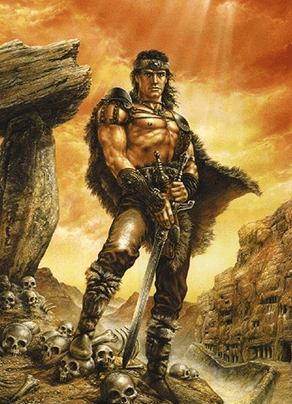 Enemies? Crushed. Having them driven before you? Seen. Lamentation of their women? Heard. Not being listened to? Then to hell with you!
"The fact is, barbarian heroism has the advantage of a certain clear, solipsistic simplicity; any itchy kid can take up a big sword, pull on a loincloth, and set out to carve his way to glory, and some turn out to be good at it (or just lucky)."
— Call No Man Happy Until He Is Dread

Loin cloths or Pelts of the Barbarian, taut rippling muscles, oiled back, impressive weapons, the beard of a grizzly bear (or inexplicably clean-shaven at all times) and glorious manly manes.

The Barbarian Hero is the ancient-era (or Future Primitive) badass, armed with muscles upon muscles and a variety of very sharp bladed objects, whose job it is to kill lots of monsters (human or inhuman) and kick lots of ass. While he seems to favor Cool Swords (the bigger, the better) he's more likely than other heroes to have An Axe to Grind, Carry a Big Stick, Drop the Hammer or Flail Epically. A Mighty Glacier, or even a Lightning Bruiser, he's able to defeat wizards and giants despite having no magical abilities (in myth, this was often ascribed to divine ancestry). One of The Oldest Ones in the Book, a popular heroic archetype since ancient times, but seems to be coming back into style recently.

This type of character seems to lean more toward the Anti-Hero side of the scale, and he may be the white sheep of an Always Chaotic Evil Barbarian Tribe. If he is modelled in any way on Genghis Khan, it generally means he will end up becoming King By His Own Hand and generally an example of Modest Royalty. His enemy will often be a Sorcerous Overlord: both an overlord for him to be anti-authoritarian against and an Evil Sorcerer for him to be physical and brave against to emphasise the ideal of combined physical and mental mastery.

Part Truth in Television before modern age, for less than intuitive reasons: usually "civilized" urban classes, despite having guaranteed access to better food, schooling and military training, suffered dearly for other flaws of lesser affluent societies than ours. Such as inbreeding pushed to ridiculous levels from King (out of choice) to commoners (out of lack of affordable transport to seek a mate outside village or city; this problem, incidentally, was solved by the steam engine: railroads!) and chronic diseases due to overcrowding and unsanitary conditions (like tuberculosis, dysentery, or skin diseases). The barbarian might have had a nasty, brutish and short life due to everyday violence and the need to provide for himself in face of danger, but at least he was far from everyday filth and crowding. Jared Diamond touched the issue when he discussed the evolution of the humans from hunter-gatherers to farmers.

A very common variant are the clones of Conan the Barbarian, there are some terms, such as Conanesque or Conanesco (Hispanic variant), similar to what happened to Tarzan (see Tarzan Boy).

There is frequent overlap with Proud Warrior Race Guy, Noble Savage, and The Berserker. Often fond of being In Harm's Way. Females who fit this Trope are often of the Nubile Savage and/or Jungle Princess type.