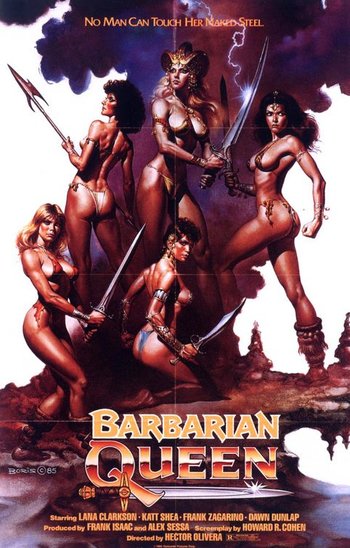 “I’ll be no man’s slave and no man’s whore. And if I can’t kill them all, by the gods they’ll know I’ve tried.”
Advertisement:

Barbarian Queen is one of the many Heroic Fantasy films produced by Roger Corman in The '80s to capitalize on the popularity of fantasy films in the wake of Conan the Barbarian. Released in April of 1985, it was the third such movie that Corman produced in Argentina.

Word of God is that the movie was written to give a starring role to Lana Clarkson, who had proven quite popular and impressed Roger Corman himself in a minor role as the woman warrior Kaira in the original Deathstalker

. Given the timing of the film's release, it seems likely that it was also meant to capitalize on that summer's release of the 1985 Red Sonja movie.

The movie opens on a barbarian village where Amethea is about to wed Argan. Busy with preparations for the wedding, the villagers are caught off-guard when they are attacked by Lord Arrakur. The village is completely destroyed, with the male survivors recruited as gladiators for the arena and the women - including Amethea's younger sister, Taramis - being taken for Lord Arrakur's harem.

Joined by her handmaiden Estrild and fellow warrior Tiniara, Amethea sets off on a quest to rescue her people and avenge the destruction of their home. Along the way to Arrakur's city, they attack an outpost where they discover a seemingly traumatized Taramis. Once in the city, they meet up with a rag-tag group of rebels, agreeing to help them as best they can.

Unfortunately, things go wrong after Estrild attracts the attention of two guards and Taramis turns herself in to Lord Arrakur. The rest of the team are captured after that and Arrakur becomes obsessed with breaking Amethea even as Taramis becomes his new favorite plaything. Eventually, Amethea and Estrild both win free and are able to contact the rebels. The movie ends with most of the gladiators joining the rebels in fighting a coordinated battle against Lord Arrakur and his men, with Amethea leading the rebels in some simply Stripperiffic "armor".