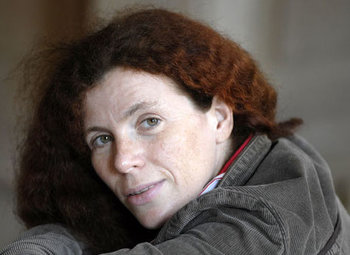 Yulia Latynina (1966-) is a famous Russian journalist, well-known (and infamous in certain circles) for her outspoken opposition to the Russian government, somewhat jaded version of classical liberal political views and aptitude for accessible and competent economical analysis (as she is primarily an economic journalist).

She also writes books, which generally feature Crapsack Worlds (which are often either modern Russia or clearly based on it, or so many people tend to interpret it), consequent Black-and-Gray Morality, successful Evil Plans and the far cynical side on the Sliding Scale of Idealism vs. Cynicism.

Aside from standalone stories and novels, Latynina is primarily known for three of her long novel cycles: