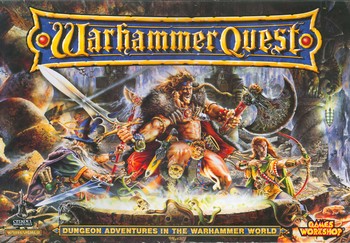 Warhammer Quest is the Spiritual Successor to Heroquest. A Dungeon Crawling Adventure Board Game set in a version of the Warhammer universe. Using modular dungeon tiles to create a series of endless dungeons, modified slightly each time to represent a different location for each adventure by placing different obstacles, doors, enemies and fixtures. Up to four heroes — the barbarian, the elf, the dwarf, and the wizard (Although there were other characters who could be added) — explore each adventure and play against the other player, who represents the forces of evil and acts much like a Game Master in that they know everything about the current quest in advance and reveal it as the players advance. The game can be a simple Dungeon Crawling game, or it can be expanded to include a role-playing element.