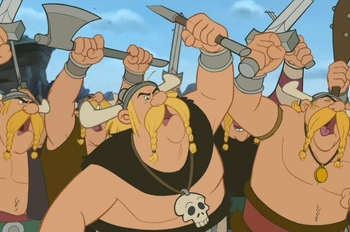 We shall pillage and plunder... then braid each other's hair while painting our nails!
Advertisement:

While professional armies today and even going back to ancient times prefer a short haircut for practical reasons, less organized and regimented warriors often preferred long hair, generally in a braided style. This is especially common on the Proud Warrior Race Guy, the kind of barbarian to wear a Beard of Barbarism and Barbarian Longhair, and the Braids, Beads and Buckskins Native American or his Fantasy Counterpart Culture equivalent.

In such cultures, a man's hair, and often its elaborate presentation, is a matter of pride, and may even be treated as an integral part of his masculinity, with the braiding of a boy's hair being part of the rite of passage between boyhood to manhood, or being properly blooded as a warrior. In some cultures the number, style and/or pattern of braids might signify rank, number of kills or children, or something else. Cutting a warrior's braids off is a symbolic castration, done to humiliate a prisoner one has no respect for or to signify casting the shorn one from the brotherhood of warriors, for crimes or lack of honor. Cutting one's own braids off signifies rejection of warrior-hood, either giving up the sword or a symbol of abandoning the rules of honor, for instance after one has sworn revenge by any means necessary.

A related important hairstyle was the Samurai style in feudal Japan, with the top-knot only permitted to their caste.