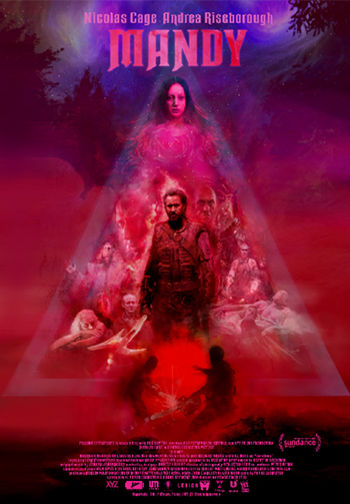 "Under the crimson primordial sky, the wretched warlock reached into the dark embrace."
Advertisement:

For the best reading experience, play the music from this clip

Mandy is a 2018 psychedelic action horror film directed by Panos Cosmatos of Beyond the Black Rainbow and starring Nicolas Cage, Andrea Riseborough, and Linus Roache.

Set in 1983, the film centers on a logger named Red Miller (Cage) who lives in the Shadow Mountains with his beloved wife Mandy Bloom (Riseborough). When she is spotted by the sadistic cult leader Jeremiah Sand (Roache), he has a demonic gang kidnap Red and Mandy, bringing their tranquil existence to a horrifying end. Now, driven by fury and vengeance, Red goes after the cult and the entities that they have brought forth.

The film was co-written by Cosmatos from a story he conceived, and co-produced by Elijah Wood through his SpectreVision company. It premiered at the 2018 Sundance Film Festival in January of that year before getting a theatrical release in mid-September.

Mandy is one of the last films scored by composer Jóhann Jóhannsson (Sicario, Arrival, mother!), its premiere occurring under a month before his death. The film is dedicated to him.

1. The Shadow Mountains
2. Children of the New Dawn
3. Mandy