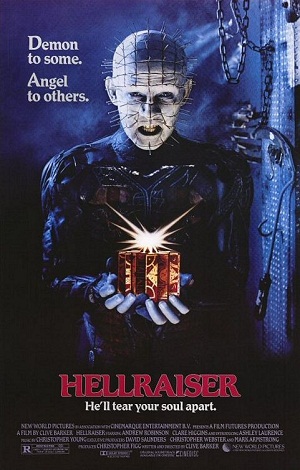 Hellraiser is a 1987 horror film directed by Clive Barker, based on his novella The Hellbound Heart. It is the first film in the Hellraiser series.

Somewhere in the orient, the hedonistic Frank Cotton (Sean Chapman) acquires a puzzle box from a mysterious Chinese man. At his home in London he eventually figures out the configuration, before he is is dragged off by unseen forces. Some time later, his brother Larry (Andrew Robinson) and Larry's second wife Julia (Clare Higgins) visit the house, and with Frank seemingly gone, decide to move in. By accident some of Larry's blood is spilled on the floor in the attic, and Frank rises from the dead as a skinless undead human. He tells Julia (with whom he had an affair in the past) that he has escaped from a dimension ruled by beings called Cenobites who merge the boundaries between pleasure and pain, and convinces her to keep it a secret from Larry and find men for him to feed off on. Meanwhile Larry's daughter Kirsty (Ashley Laurence) discovers the puzzle box, and comes face to face with the Cenobites, who are interested in getting Frank back to their realm.