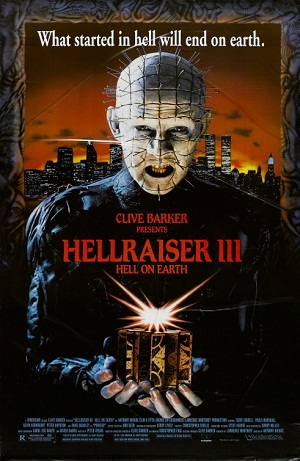 Hellraiser III: Hell On Earth (1992) is the third film in the Hellraiser series.

At an antique shop in New York, a nightclub owner named J.P. Monroe (Kevin Bernhardt) purchases an old statue pillar for his private collection. Several weeks later in a hospital emergency room, reporter Joey (Terry Farrell) is witness to someone being ripped apart by meathooks that came out of nowhere. The trail leads her back to the club, where she befriends a girl named Terri (Paula Marshall) who brought the person in, but Terri herself is hesitant of telling Joey anything. Monroe learns that the statue contains the essence of the Cenobite Pinhead (Doug Bradley) when it devours a girl alive in front of him, and is eventually convinced by Pinhead to bring him more victims in exchange for power. When Joey is visited by the spirit of Captain Elliot Spencer (Bradley), Pinhead's human self, she learns that Pinhead has become evil incarnate and wants to plunge the world into hell.