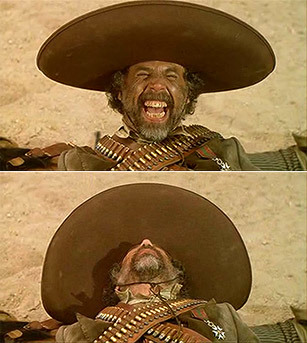 At least he got the last laugh.
"Stop that laughing! Have you forgotten what happened last time? If you don't stop this laughing, you're gonna end up dead just like your idiot hyena cousins!"
— Judge Doom, Who Framed Roger Rabbit
Advertisement:

Sometimes when a character, especially a Sad Clown or Plucky Comic Relief type, is facing death, they find the whole experience laugh-out-loud funny. Or sometimes, the laughter itself is what kills them, especially if they've just been hit with Comedy as a Weapon. Either way, that's where this trope comes in. Can also overlap with Laughing Mad, especially if the character is a villain who plans on Taking You with Me. Laughter may be their way to Face Death with Dignity.

Compare Dying Smirk, Go Out with a Smile and Comfort the Dying. Contrast Laugh Themselves Sick, which doesn't (usually) involve any actual injury. Although a plausible reaction if played right, this trope is not to be confused with the Horror Comedy Tabletop RPG of the same name.

This is a death trope, so expect unmarked spoilers.