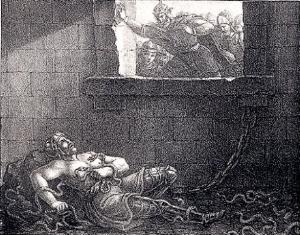 "Death of Ragnar Lodbrok", by Hugo Hamilton (1830)
We struck with our swords!
I have stood in the ranks
of fifty-one folk battles,
foremost in the lance-meet.
Never did I dream that
a different king should ever
be found braver than me—
I bloodied spears when young.
Aesir will ask us to feast;
no anguish for my death.
–-Penultimate stanza
Advertisement:

"Krákumál" is an Old Norse poem preserved in several Icelandic manuscripts with minor differences. It is thought to have been originally composed around the middle of the 12th century in Orkney or Scotland.

"Krákumál" purports to be the last words of the legendary Viking king Ragnar Lothbrok, who, as the story goes, was, after an illustrious career of battle and conquest, captured by King Aelle of Northumbria and thrown into a pit of serpents to die. As Ragnar waits for death, he recalls the battles and feats of strength that earned him fame. He concludes that he does not need to worry about dying, because he has led a glorious life, and will be feasted in Odin's hall in the afterlife.

The title translates to "Words of the Raven" (or: the Crow), though it is not entirely clear why it is named thus; which is part of the reason it is much better known in English as the "The Death-Song of Ragnar Lothbrok". "Krákumál" is the earlierst evidence of a tale of Ragnar Lothbrok, which was apparently still somewhat different from the prose versions that have come down to us in writing (in The Saga of Ragnar Lodbrok and book 9 of Gesta Danorum), as the poem mentions a number of names of places and persons that do not appear in the later works.

"Krákumál" was first printed in 1635 in a Latin translation, and first translated to English in 1758. Since then, it had considerable influence on the formation of the stereotypical image of the Viking warrior in modern culture.

You can read "Krákumál" online in Old Norse

and in English translations by Thomas Percy (1763)

, or you may check out samples from the translations of James Johnstone (1782)