Blood Is Squicker in Water 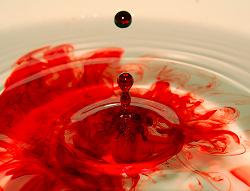 Will all great Neptune's ocean wash this blood
Clean from my hand? No; this my hand will rather
The multitudinous seas incarnadine
Making the green one red.
— Macbeth, Macbeth, Act II; scene ii.
Advertisement:

One way to show Ludicrous Gibs without breaking the laws of biology is to have a character die in a body of water, thus diluting the blood and causing it to billow out in clouds. As a bonus, this tends to look very symbolic... of nothing in particular. Perhaps it stems from the Primal Fear of blood in general, and the illusion that there's more blood than there really is.

Of course, if this happens in the open sea, the probability that someone will mention sharks, and their ability to smell a single red blood cell from 6 million light years away, rapidly approaches 1.note Although experiments proved that sharks don't go for human blood. Fortunate, isn't it?

Another common appearance is in an Out, Damned Spot! hand-washing, or a post-carnage Shower of Angst.

In a case of Reality Is Unrealistic, real blood diluted in a large volume of water will actually turn it yellow, the color of blood plasma (the liquid portion of the blood), not pink/red. However, the picture above is accurate in regards to relatively small amounts of water (or relatively large amounts of blood).

A related phenomenon above the waterline is Pink Mist. Can be a symptom of Gorn. A Bath Suicide or Deadly Bath is likely to invoke this. Common in Toilet Horror. Often overlaps with Symbolic Serene Submersion.

Not to be confused with Blood in the Water.