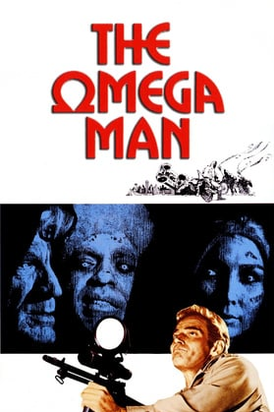 "There's never a cop around when you need one."
— Robert Neville, the last man on Earth.
Advertisement:

The second, and perhaps the best-known, screen version of I Am Legend, The Ωmega Man was released in 1971 and directed by Boris Sagal.

The film stars Charlton Heston as Robert Neville, a military scientist who saves himself at the last minute from the fallout of biological warfare between the Soviet Union and China. The end result is that he's now the last man on Earth, and so he spends his existence just trying to survive. This is complicated by a group of survivors, now mutated into albino mutants and led by the charismatic Matthias (Anthony Zerbe). "The Family," as they call themselves, have set out to eliminate all traces of civilization, Neville included.

Has nothing to do with Omega Men.