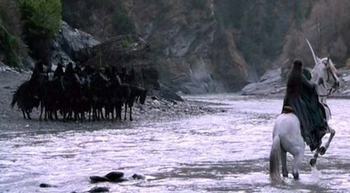 They just had their horseshoes manicured.
"Now If you doubt this tale is so,
I met that spook just a year ago.
Now I didn't stop for a second look,
But I made for the bridge that spans the brook.
Cause once you cross the bridge my friends
The ghost is through, his power ends."
— Brom Bones, The Adventures of Ichabod and Mr. Toad
Advertisement:

Like garlic and salt, water is one of the common substances widely held to have special powers. Among other things, this means it can be used to protect against various creepy-crawlies and things that go bump in the night. Putting yourself across some water might be all it takes to save your neck.

Folktales are inconsistent regarding on which creatures this works, but it's generally best against vampires, ghosts, nuckelavees, and witches and wizards. For almost anything else, it's still worth a try. But beware of bridges: depending on the tale, they might be able to cross these or not.

Symbolically, it makes sense for water to work as a barrier against certain monsters. Water is the source of life and so naturally works against the undead. On a practical level, it can also deter predatory creatures that hunt by smell, as water can misdirect or damp scent trails.

There are some variations as to what form of water will work. Almost always, the water must be moving. Rain or the ocean may or may not qualify, but rivers always do. The origin of this may be that Jesus was baptized in a river, but undoubtedly helping the folklore is that running water is safer to live near than stagnant water. Stagnant water doesn't wash away harmful content, is more inviting to mosquitoes and other vermin, promotes mold, and so on. Many of the aforementioned ghosties are associated with disease, so it's logical to interpret the running water to be a barrier against them. Holy Water, of course, packs extra punch, but is less frequently found flowing around on the landscape.

Sub-Trope of Supernatural Repellent. If water is actually harmful to these creatures, you can Kill It with Water. See also Healing Spring, Super Drowning Skills, and Chase Stops at Water. For potential contrast, see Walk on Water, Super Not-Drowning Skills.