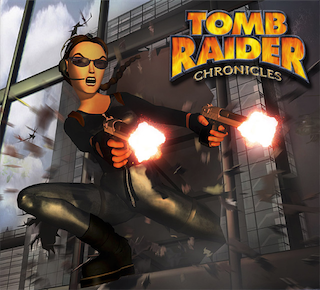 She never was one for diplomacy.
Advertisement:

Winston, Father Dunstan, and Charles Kane drive to Lara's mansion to hold a memorial service in her honor. While there, the men recall their memories of Lara and her past exploits around the world, and the player relives four short adventures, set in different time periods. The first is Lara's conquest of the Philosopher's Stone in Rome, where she meets up with Larson and Pierre for the first time. Next is her adventure aboard a Russian submarine in search of The Spear of Destiny. Third, Father Dunstan tells how a young, teenage Lara stowed away to the Black Isle in Ireland, facing supernatural threats there, and finally, Winston recalls how Lara broke into Von Croy Industries and stole the Iris from Werner.

Chronicles is unique in that none of the action occurs in the present day; instead, the game is set across four brief, but varying flashbacks. The first, the Rome section, is typically considered a standard Tomb Raider setting. The Russian section is unique in that Lara finds her way through the submarine twice, with significant changes to it the second time. The Ireland section features the same young, unarmed Lara as in the last game's Angkor Wat, and the Von Croy Industries section employs a futuristic vibe last seen in Nevada.

Gameplay-wise and graphically, it is virtually identical to The Last Revelation; the only new moves are swinging across poles and tightrope-walking. Certain sequences clash with the series' own established canon, plus a couple of levels are incredibly easy to break and make Unwinnable (even compared to some of the buggier levels in the earlier games). While most weren't bad, its reviews were still mediocre compared to the earlier games. The release of the level editor with the PC version is quite possibly the most interesting thing about the game.