It Always Rains at Funerals 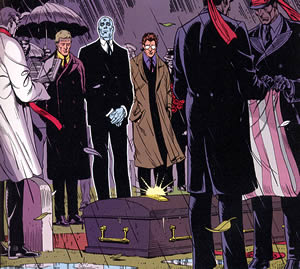 "Everyone at the funeral felt a terrible sorrow at the loss of the Abbot, and the heavens, too, wept tears of grief."
— Dragon Quest VIII
Advertisement:

As if funerals weren't depressing enough, it's gotta rain, too.

Weather has always been used symbolically when it comes to death. When characters die it's often overcast. Even when all the characters are doing is visiting someone's grave, the sky will be cloudy and the colors will seem to be washed out. But quite often, when there's an actual funeral, it's always raining (though sometimes it'll be snowing). Or precisely at sunset. Or at night. Anything but in the bright, shiny daylight. It makes you wonder why nobody thought to check a weather forecast before scheduling the funeral.

This trope is a natural consequence of Partly Cloudy with a Chance of Death, Grave Clouds, and Snow Means Death. Helps explain why characters think they can get away with invoking Sand In My Eyes: it's just raindrops.

Subtrope of Gray Rain of Depression. This trope is the sister and direct opposite of It's Always Sunny at Funerals, and is usually part of a Meaningful Funeral scene.