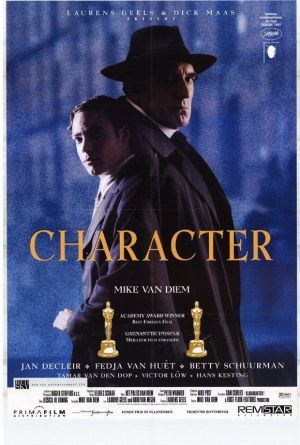 Character is a 1997 film written and directed by Mike van Diem, a co-production of The Netherlands and Belgium.

It is set in a port town in The Netherlands sometime in the 1920s. Dreverhaven, a merciless bailiff who specializes in rent collection, is found dead at his place of business, a knife in his stomach. The police arrest one Jacob Willem Katadreuffe, a young lawyer who is known to be an enemy of Dreverhaven, and who bears the marks of having recently been in a fight. Jacob reveals to his interrogators that he is actually Dreverhaven's illegitimate son. Some twenty-odd years before Dreverhaven knocked up his housekeeper, Joba Katadreuffe. Joba rejected Dreverhaven's offers of marriage and financial support, and raises her boy alone. Jacob strives to raise himself out of poverty, while continually crossing paths with his distant, taciturn father.