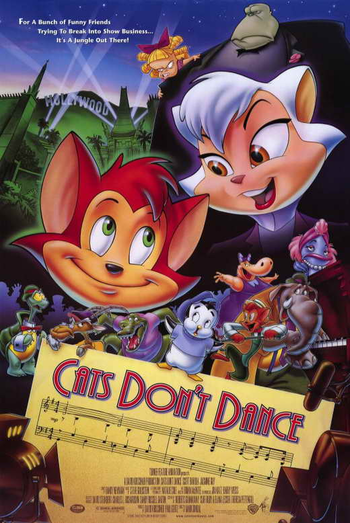 Cats Don't Dance is a 1997 animated musical film, and one of only two projects by Turner Entertainment's Turner Feature Animation unit (itself an outgrowth of Hanna-Barbera's feature animation wing) before Warner Bros. took over (the other being The Pagemaster). The film was choreographed by Gene Kelly, and the main character was based on him as well. Kelly died in 1996 mid-production.

The Golden Age of Hollywood, 1939: A singing and dancing cat named Danny (Scott Bakula) dreams of being a big movie star. He gets a role in the latest film starring sickeningly adorable child star Darla Dimple (Ashley Peldon), only to find out the hard way that animals in Hollywood only get minor, stereotypical roles. Determined to show Hollywood their talent, Danny rounds up some of his newfound friends, and tries to find a way to impress the studio exec producing the film. When Darla finds out, her true nature begins to show, and she decides to sabotage the animals' plans so they don't steal her spotlight.

Filled with shout outs to classic films, most notably Singin' in the Rain and Sunset Boulevard, the film was poorly promoted and, as a result, underperformed at the box office. However, it was well received critically and still has a loyal following to this day (particularly among the Furry Fandom).

Danny expresses his desire of becoming a celebrity cat upon arrival in Hollywood.

Danny expresses his desire of becoming a celebrity cat upon arrival in Hollywood.