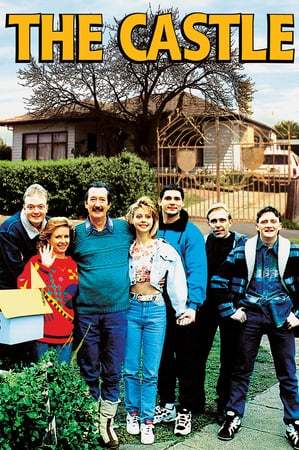 The Castle is a 1997 Australian film from the company that would become known as Working Dog Productions, focusing on an ordinary family of "Aussie battlers" who live next door to an international airport. Their life is turned upside-down when the government tries to force them out of their house, but the family stands their ground and fights it both in and out of the courts.

Regarded by many to be the greatest Australian comedy film ever made, thanks to its endlessly quotable catch phrases and heartwarming story. The dialogue is heavy on Australian expressions, colloquialisms and cultural references. A partially redubbed version replaces some of the dialogue with Americanized expressions.

The film focuses on the close-knit Kerrigan family, made up of a mother and father and their four adult kids (and one son-in-law).

The Kerrigans are informed that an airport consortium is buying them out to make way for a new freight terminal. Darryl can't believe that the law can allow such a thing. "A man's home is his castle!" However, the legal doctrine of compulsory acquisition (aka compulsory purchase, or eminent domain) says they have no choice in the matter.

Darryl decides to fight the compulsory acquisition with the support of his neighbours. He enlists the help of his small-time suburban lawyer Dennis Denuto (Tiriel Mora), whom he has complete faith in, but Dennis's inexperience in the courtroom almost spoils the case. To make matters worse, the unseen and powerful consortium backing the project make very clear they are going to get their way, whether by the book or by resorting to threats and intimidation.

Just when all seems to be lost, Darryl strikes up a chat with Lawrence Hammill (played by the venerable late actor Charles "Bud" Tingwell), who happens to be a retired Queen's Counsel experienced in the area of Constitutional law. Lawrence offers to help Darryl take his case all the way to the highest court in Australia...and the rest is history.

Not to be confused with American murder-mystery series Castle, or the novel The Castle by Franz Kafka. Or castles as a setting, which mostly Haunted Castle.