Film / The Cat from Outer Space 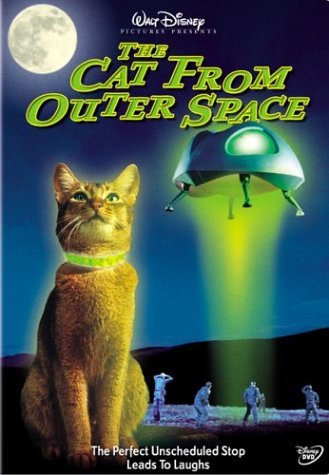 In this 1978 Disney movie, a spaceship is stranded on Earth and impounded by the U.S. government. Its pilot, a cat-like alien named Zunar-J-5/9 Doric-4-7, or Jake for short, has a collar that has special powers, including the ability to allow Jake to communicate with humans. Jake has eluded the authorities and needs the help of a man named Frank in order to reclaim and repair his ship to get back home.
Advertisement:

After Frank determines that they need gold in order to fix Jake's ship. Jake uses his collar's powers to affect the outcome of various sporting events, including horse races and pool games, to win money to buy the needed gold and repair his saucer. So Frank, Frank's friend Norman Link and Frank's new girlfriend, Liz, help Jake find the gold he needs.

Unfortunately, another problem arises when Liz is kidnapped by billionaire Charles Olympus, who wants the power of Jake's collar. Frank, Jake, and Link must track down Liz and her kidnappers and rescue her.