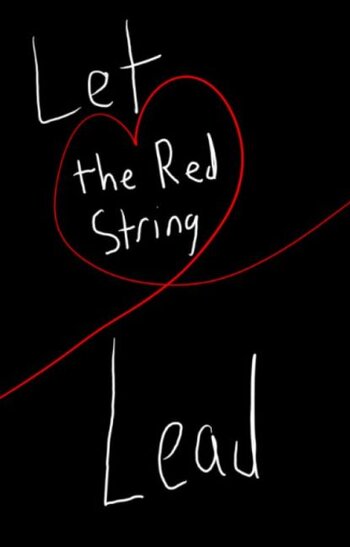 Don't worry. No one in the story is getting Strangled by the Red String. Maybe. Hopefully.
"Mara Nakamura, a junior at Buklanks High School, has to move in with her friend Matt and his roommate Mike due to her having to get out of her house. Mara has only met Mike in passing when she is walking around the halls of the school or the house, but she hasn't had time to sit down and talk to her. It's not like she wanted to, she thought the guy was cool, she just wasn't sure she wanted more people who could hurt her in her life. Matt has always warned about "the kid next door", Axel Cervantes, saying that he was bad news, and that she shouldn't talk to him. She didn't mind, like said before, she didn't want more people in her life. Until one night at 3 am, Mara finds herself sleepless after a nightmare. She makes her way outside and happens to run into Axel, then Mike starts actually trying to talk to her. Will she follow her own heart and go for who she wants? Or will she let other people control her into how she feels?"
—Synopsis
Advertisement:

is a Wattpad story by Watermelon Caticorn. It is based of the Intertwined series that they co-created with IAmHoussem17. The story still features the six protagonists but it is primarily focused on Mara, Matt and Mike. It also introduces some new characters and has a different narrative and setting.

It is currently ongoing. Some chapters were also rewritten.