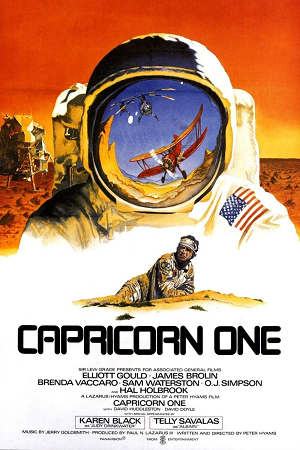 Astronauts Charles Brubaker (James Brolin), Peter Willis (Sam Waterston), and John Walker (O. J. Simpson) are the crew for the first manned mission to Mars, Capricorn One. Except they're not. A poorly made life-support system that would have killed the astronauts three weeks into their trip means they'll have to fake it, as Congress can't afford another screw-up. The spacecraft is launched empty, and the crew are taken to a remote Air Force base, where they are forced to act out the Mars landing in a studio for the benefit of television cameras.

Elliot Whitter (Robert Walden), one of the technicians at mission control, notices something strange — that the television signals are being transmitted ahead of the telemetry — and tells his reporter friend Robert Caulfield (Elliott Gould). But Elliot is killed, and he's been made an Un-person. Then when Caulfield interviews Brubaker's wife Kay (Brenda Vaccaro), her reaction to something strange Brubaker said helps him realize there's some sort of Government Conspiracy at work.

Then, when the empty spacecraft burns up on re-entry due to a defective heat shield — or so NASA says — the astronauts realize they know too much and decide to make a run for it.