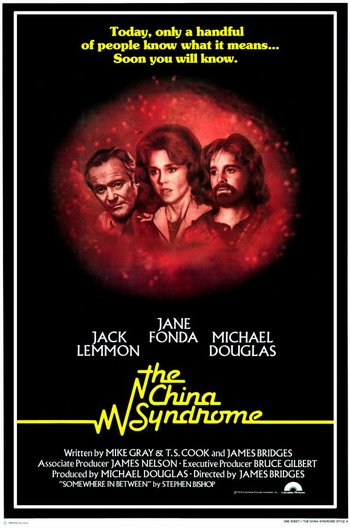 Kimberly Wells (Fonda), a newswoman for KXLA-TV in Los Angeles, is frustrated that her station won't let her cover serious news (she's stuck with light-hearted non-events). Sent on a tour of a nearby nuclear power plant to promote the positives of nuclear energy, she and her cameraman Richard Adams (Douglas) witness the reactor room just as something goes wrong. Supervisor Jack Godell (Lemmon) finds out that the core's close to meltdown and, with alarms blaring and panic mounting, works with his friend Ted (Wilford Brimley) and his team to fix the problem (during which Jack feels an unusual tremor that unsettles him for the entire movie). While Jack's team saves the plant, Richard had quietly filmed it all with his camera...

Thinking they've got a big story to report, Kim and Richard are instead told by their bosses at the station to keep quiet and have the film placed in storage while their lawyers figure out their potential liability. Meanwhile, Jack tries to warn his bosses that there's something fishy with the plant, only to have them insist there's nothing wrong. An investigation into the incident gets rubber-stamped. Meanwhile, the company responsible for the construction of that plant is busy trying to get another one built in a hurry...

At every turn separately and then as a team, Jack, Kim and Richard try to find out what happened and try to warn others that something's wrong. Eventually Jack realizes that the tremor was caused by faulty welding on the main pump, which will cause the pump to fail if it is pushed to full capacity; This faulty welding was never discovered because, rather than test every single weld like they were supposed to do, the company decided to save money by testing one weld and submitting its test results for every other weld. If this were brought to light, it would force the immediate shutdown of the plant and, most likely, legal charges for its builders and owners.

By the time Richard's friend is hurt trying to sneak proof of the lack of testing to a regulatory committee, Jack's paranoid and frustrated enough to seize a security guard's gun and take control of the reactor. Kim tries to interview Jack live on television (breaking into KXLA's regularly-scheduled programming of The Magnificent Marble Machine; no, seriously) to help him report what went wrong, but the power company SCRAM the reactor in order to take control away from Jack - during a SCRAM it runs fully automatic for a short time. The power company kills the TV signal and sends in a SWAT team to shoot Jack. While he lies dying, the faulty main coolant pump goes to maximum power ... during which the reactor goes through a terrifying few minutes of OMG it's gonna blow! The pump is finally shut down just as it completely breaks free of its moorings. At the end with the power company trying to paint Jack as a madman, Kim approaches Jack's friend Ted and gets him to say that Jack was sane and that there needs to be a full investigation.

The China Syndrome came out during the post-Watergate era, at a time when the public was in a paranoid mood about the people — politicians, the corporations, the media — who seemed to be in charge of things. What made this movie stand out was that on March 28, 1979 (two weeks after Syndrome was released) the Three Mile Island nuclear disaster

took place, making what was a standard thriller into a prescient piece of film-making. And seven years later, the emergency shutdown actually causing a meltdown is even more eerily similar to the Chernobyl disaster

Note that nothing actually happens in or to China; the title comes from a joke that if a nuclear reactor did have a meltdown it would burn all the way through to China on the other side of the Earth. Actually, a meltdown's extreme heat would get absorbed by the surrounding earth, and would get as far as the underground water supply where it would make things a hundred times worse. Also, if it did burn through the Earth to the other side, it'd end up in the Indian Ocean.