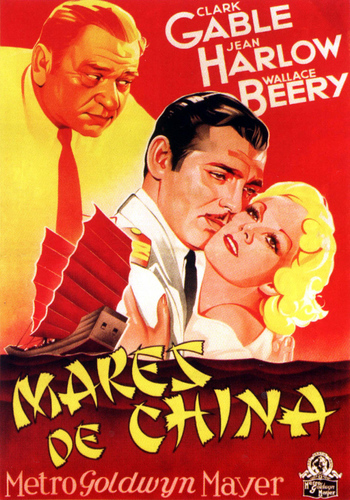 Gable is Alan Gaskell, an English (not that you can tell by his accent) captain of a tramp steamer that is sailing the South China Sea between Hong Kong and Singapore. On board is Dolly Portland (Harlow) a brassy (Jean Harlow was never not brassy) "entertainer" who has a job in Singapore. She is also an old girlfriend of Gaskell's and she's interested in starting things up again. Complicating this is Sybil Barclay, an English widow and aristocrat (Russell, in one of the Fake Brit roles she played early in her career). It turns out that Sybil was an old girlfriend of Alan's as well, and in fact the reason that Gaskell is in East Asia in the first place is that he left England after Sybil rejected him.

Jamesy McArdle (Beery), a roughneck admirer of Dolly's, is aboard to provide further romantic complication. But the real complication is the £250,000 of gold that Gaskell and his ship are carrying to Singapore.