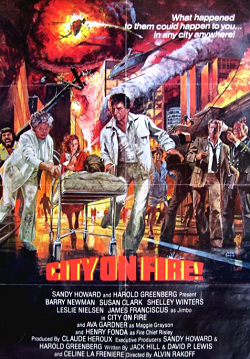 City on Fire is a 1979 Disaster Movie starring, among many, Barry Newman, Ava Gardner and a pre-syndrome Leslie Nielsen.

In an unnamed Midwestern city, Herman Stover, an oil refinery worker, finds out that he isn't getting the promotion that he's had his eyes on. After being laid off instead, he takes out his frustration on the city by sabotaging his workplace. Add the city's hilariously poor zoning that has placed the oil refinery right in the middle of the city, courtesy of the mayor's questionable dealings, and a major water shortage, and the result is a perfect storm that soon has the whole city in flames. Among the buildings hit by the fire is a not-quite-up-to-code hospital that employs the affable Dr. Whitman and a take-no-shit nurse, Andrea Harper. Did we mention that Stover had been obsessed with Dr. Whitman's fiancée?

For the Mystery Science Theater 3000 episode where they riffed the movie, see here.