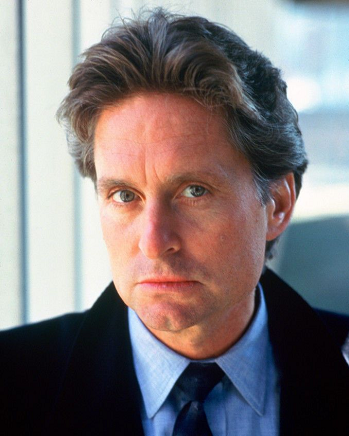 "There was a certain malleability to his persona: With that anxious downturn to his mouth, that too sharp chin, and those hungry, watchful eyes, he could express just about anything with a minimum of effort. He could be convincingly cocky, confident, brilliant, ordinary, awkward, lost, pathetic, silly, extreme, mild, or idiotic, all while essentially remaining himself."
— Bilge Ebiri, Vulture

Michael Kirk Douglas (born September 25, 1944) is an American actor and producer, and the most famous son of Hollywood legend Kirk Douglas.

His first major role was in the TV series The Streets of San Francisco alongside Karl Malden. He has since won an Emmy, a Golden Globe and two Academy Awards, the first as producer of One Flew Over the Cuckoo's Nest, and the other for his role as Gordon Gekko in Wall Street. Other popular films on his resume include The China Syndrome, Falling Down, Romancing the Stone, Basic Instinct, Wonder Boys and Traffic.

He's been married to Catherine Zeta-Jones since 2000. He was diagnosed with throat cancer in 2010, but appears to have gotten past it.

He is also the reason why Michael Keaton goes by that name, as the latter's real name is also "Michael Douglas".note This became Hilarious in Hindsight when they both got roles in the Marvel Cinematic Universe as people with advanced tech, an animal-themed alias and a huge grudge against Tony Stark, plus both actors have had Michelle Pfeiffer as a love interest. They have yet to meet onscreen in it, still.