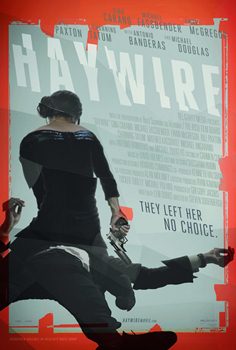 Haywire is a film directed by Steven Soderbergh.

Mallory Kane (Gina Carano), the lead operative of a Private Military Contractor that does work for the CIA, is betrayed by her employer after a hostage rescue mission in Barcelona. She must then set out to find out why she was betrayed and take revenge on everyone involved.

Carano is a former MMA fighter, and her background makes her a natural choice for the ass-kicking, hardcase Mallory. Her star-studded supporting cast includes Ewan McGregor, Michael Fassbender, Michael Douglas, Antonio Banderas, and Bill Paxton as her father.