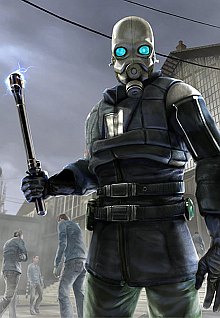 Pick up that can.
"What scared me the most was when my father would put on the gasmask. His face would disappear... This was not a human being at all."
— Philip K. Dick
Advertisement:

An extremely popular form of the Faceless Goons, achieved by taking your enemy Mooks and giving them all gas masks. Note that this almost always occurs in situations where the gas masks serve no real practical purpose, as chemical weapons aren't even a factor in whatever conflict is involved.note With how much they restrict both your breathing and vision when actually worn, few people would ever want to wear one without being in a situation making it necessary.