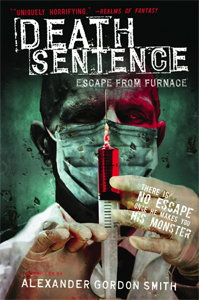 The original cover for the third book. It was rejected for being too scary.
Beneath heaven is hell. Beneath hell is Furnace.
— The Warden (series tagline)
Advertisement:

Escape from Furnace is a series of five books written by Alexander Gordon Smith detailing the adventures of Alex Sawyer in escaping Furnace - an underground penitentiary for teenage criminals.

The main books are: