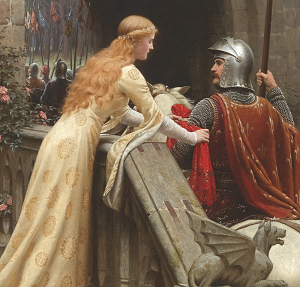 The Knight in Shining Armor receives The Lady's Favour
Advertisement:

The male lead is about to go off to fight and there is a very real possibility that he'll be coming back in pieces. Knowing this, his female love interest decides it would be a good idea to hand him an object — some piece of jewelry, a trinket, a piece of clothing, a token of some sort — that she claims is of great personal importance to her. She makes him promise that he will give it back to her, thereby creating a small bit of assurance that he will return from the battle alive. He invariably will, if for no other reason than he promised he would return her "most prized possession."

There are plenty of variations to this scenario. The guy could be facing off against the Big Bad, the Monster of the Week or just in The Tourney, perhaps even with her watching. The token could be something the lady made herself, a family heirloom, something worth a good deal of money, etc. Also, how important it really is is arguable. It may simply be an excuse to make her guy promise to come back.

If the couple is still in Will They or Won't They? limbo, this is a sure sign that the scales are leaning more toward Official Couple. This is also a frequent possession of someone under The Dulcinea Effect.

Tales taking place during Medieval times, particularly those involving Courtly Love contain a literal favour from the lady. It's generally an article of clothing made specifically for that purpose.

Sub-Trope of It Was a Gift. Compare Memento MacGuffin, Her Boyfriend's Jacket, Favors for the Sexy, and Motivational Kiss.