Series / Have Gun  Will Travel 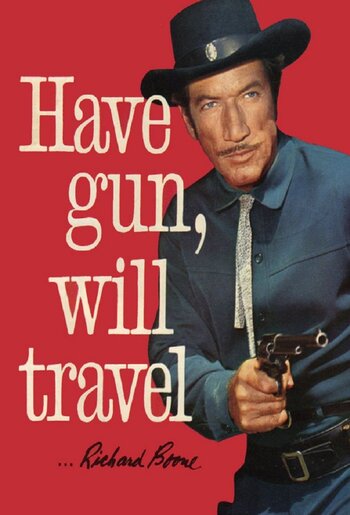 "I may no longer be an officer and a gentleman, but I am not an assassin."
"Have Gun - Will Travel reads the card of a man...
A knight without armor in a savage land...
His fast gun for hire heeds the calling wind...
A soldier of fortune is the man called.... Paladin!
Paladin, Paladin, where do you roam?
Paladin, Paladin, far far from home!"
"The Ballad of Paladin", performed by Johnny Western
Advertisement:

Have Gun – Will Travel is an American Western television series that ran on CBS from 1957 to 1963, starring Richard Boone as the gentleman gunfighter Paladin, a West Point-educated former army officer who worked as a "fixer" of sorts, settling disputes and solving problems that would normally escalate into unnecessary violence, charging a standard fee of $1000. Paladin would attempt to solve the problem with minimal conflict using his cunning and education, but if the situation called for it his skill with both his fists and his gun would prove more than sufficient.

Paladin would advertise his services through business cards which read simply:

This would as often as not lead to the mistaken idea that Paladin was a professional killer — a term he resented — which would either result in people who wanted to avoid violence turning down his offer without hearing him out, or people who wanted a killer demanding he assassinate someone. In response, Paladin would either prove himself a good person, wait for the situation to become dire enough that his would be clients realized they had no other choice but to hire him, or turn to work for the innocent people his crooked client wanted him to kill. Another common mishap was that Paladin would often be mistaken as a "dandy" from the east before proving himself to be a badass. Equally common were episodes taking place after one of Paladin's jobs, where he stumbled upon an adventure quite by accident.

Episodes ranged in tone from dark and deadly serious, to light hearted comedy, giving Boone excellent chance to display his range as an actor. The setting could vary from the prairie of the old west, the deserts of Mexico, the snow covered rocky mountains, the small town, to the big city. The show attracted dozens of guest stars, including Charles Bronson, Vincent Price, John Carradine, and Lee Van Cleef. There was also a radio version, running from 1958 to 1960, which starred John Dehner as Paladin; it was one of the last American radio dramas with regular characters. In addition, there have been three books published based on the TV show, and a movie is in the works, but has languished in Development Hell since 1997. It was set for a 2013 release, obviously that didn't happen. All six seasons are available on Netflix.

Note: Although Gene Roddenberry regularly claimed to have been the show's head writer, he wasn't - the show didn't have one - but he penned numerous episodes as a freelance writer. In fact, he has more writing credits on this show than any other series he worked on. (Yes, including this one.)

Have Gun – Will Travel contains examples of the following tropes: