Fanfic / Twice Upon an Age 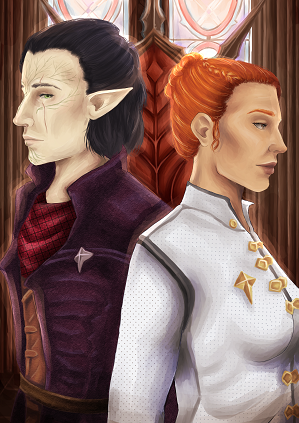 , used with permission
"Whether we live or we die, we do it together."
— The Right Hand of Andraste, to the Left Hand
Advertisement:

Note: Because this fic closely follows the plot of Dragon Age: Inquisition, there are spoilers here.

In an alternate Thedas where two Grey Wardens became the Heroes of Ferelden by working together to end the Blight, two Inquisitors rise side by side to fight an ancient evil. How will the friendship between a serious, soft-hearted Andrastian human and a snarky, charismatic Dalish elf save the world? Very carefully.

Such is the basic premise of Twice Upon an Age, a Dragon Age: Inquisition fanfic series by Lady Norbert. For Christmas 2016, the author's best friend requested a fic in which both of their 'canon' Inquisitors shared the blessings and burdens of being the Herald of Andraste. According to the author's notes, this was accomplished with the help of Chantry records and the editing skills of Varric Tethras.

It's been ten years since the Heroes of Ferelden worked together to vanquish the Archdemon Urthemiel. Lady Victoria Trevelyan and Mahanon Lavellan are both selected to attend the Divine's Conclave to see how the Mage-Templar War would be resolved. After boarding the same ship and being introduced by a chance encounter, they develop a mutual respect which evolves into a strong platonic affection. This sustains them when they emerge as the only survivors of the Conclave, each with a strange mark on their hands. Known as the Lord and Lady Herald, the Left and Right Hands of Andraste, and eventually the Lord and Lady Inquisitor, they must work together to save Thedas from the machinations of a mysterious being known as the Elder One.

Apart from the presence of double the Inquisitors, the story largely follows the plot of Inquisition, with some additional material and a few changes for flavor. Each Inquisitor brings their own strengths and weaknesses to the table; each develops their own friendships with the other companions, each has their own individual romance arc, and each has their own emotional response to the events as they unfold. The heart of the story, however, is the close bond between the two main characters.

Advertisement:
About the stories
open/close all folders

Tropes found in All This Sh*t is Twice as Weird

Tropes found in Doubling Down

Tropes found in the side volumes