Ring on a Necklace 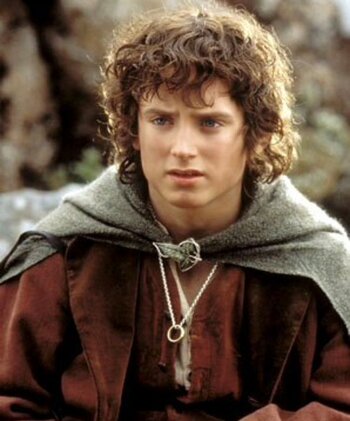 Rings are extremely common pieces of jewellery that often carry some special significance to a person, especially if it was given to them by another person they care for. Rings are usually designed to be worn on fingers but in this case a character opts for a less conventional approach, instead wearing a ring on a necklace like a pendant. This is often done to keep whoever gave them the ring symbolically close to them, while not having it more obviously on-show for personal reasons. Common reasons include:

Although a lot of examples involve wedding/engagement rings and romantic relationships, it's not exclusive to this; the ring just has to hold some kind of importance or sentimental value to the character. More rarely, the necklace itself (such as a chain, a length of ribbon, etc) may also have some significance to the wearer.

A Sub-Trope of Meaningful Appearance.

Compare and contrast with Fashion-Based Relationship Cue, which this trope occasionally overlaps with. This trope also has a good chance of overlapping with Tragic Keepsake and Orphan's Plot Trinket. Not to be confused with Ring Around the Collar.