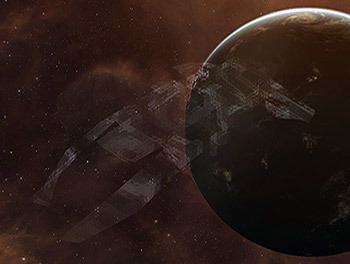 "Only way they'll detect us is if you all start singing the Russian national anthem."
"Stealthiness in space was a bit like playing hide-and-seek while naked in a brier patch: it could be done, but it was a thorny business that depended upon the fact that nobody would believe you were crazy enough to actually try to pull it off."
— J. Daniel Sawyer, Free Will (and Other Compulsions)
Advertisement:

Stealth, be it camouflage or outright invisibility, is often a deciding factor in many forms of combat. In fiction, this should apply to spaceship combat, too.

In reality, stealth in space is a lot harder than people think, and Invisibility with Drawbacks is the name of the game. (More on that in the Analysis subpage.) As such, most writers either Hand Wave the whole business, pretending that ships in space are like submarines in the ocean and thus naturally stealthy, or rely on some heavy-duty Applied Phlebotinum to make thermodynamics go away. These problems can be circumvented to a certain extent by manipulating your setting's Technology Levels, which don't need to conform to modern technology; for example, a period-accurate Raygun Gothic story set in the retro-future would have rocketry and even atomic power, but not the sort of high-resolution thermographic cameras and high-capacity visual processing computer power necessary to detect and analyze a cloaked ship the way we could today. It's not common for a harder sci-fi to have vaguely plausible stealth, but there are some.

A prototype Dimensional Submarine made by the Gamilas Navy that is designed to operate in Subspace for stealth missions and assignments.

A prototype Dimensional Submarine made by the Gamilas Navy that is designed to operate in Subspace for stealth missions and assignments.