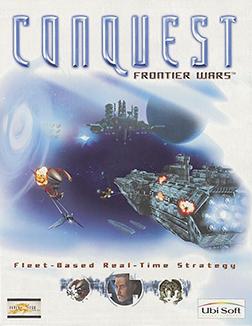 Your fleet, your repair bills
A brave attempt to do something different with the Real-Time Strategy formula, Conquest: Frontier Wars features three sentient species and a different take on resource management. Probably the only game to proclaim 'Fleet-based Real-Time Strategy' on the cover (Yes, we know what you're thinking!), CFW places you in command of Terrans (Humans), Mantis (Bug-like aliens) and Celareons (Energy Beings in robot armour) fleet.
Advertisement:

Battles can be waged across multiple, wormhole connected star systems with variety of (unique for each race) warships.