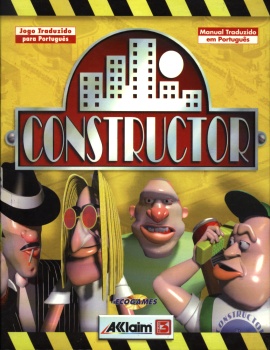 A Real-Time Strategy game set in a warped satire of the UK. You're put in the role of a building contractor. The object is to build and nurture a thriving neighborhood, with the ultimate goal of putting your rivals out of business.
Advertisement:

Also, each of the companies are owned by organised crime firms. That's a bit of a sticky wicket, eh, wot?

Provided they're kept happy, tenants will breed rapidly, swelling your ranks with tomorrow's civil servants — all of whom are on the take. For instance, producing a General Practitioner grinds your rivals' hospitals to a halt, while having a Magistrate results in longer jail sentences for undesirables. Think of it as The Sims meets The Departed.

Much of the game's strategy comes from its tenant types, all of whom produce different workers and have their own respective quirks. They also tend to complain — a lot. Players also have to contend with the omnipotent City Council, which sometimes demands you develop a specific estate within the allotted time. Fail to do so, and you'll be sacked. Literally.

Constructor was developed for MS-DOS and released in 1997. The game was ported to the PlayStation, macOS and Windows-native DirectX-3 the following year. A sequel set in The Roaring '20s, Constructor: Street Wars (Mob Rule in North America) was released, but was not well-liked by fans. A HD remake of the original game was released in May 2017 for PlayStation 4, Xbox One, Nintendo Switch, and PC with an enhanced version "Constructor Plus", following in 2019.