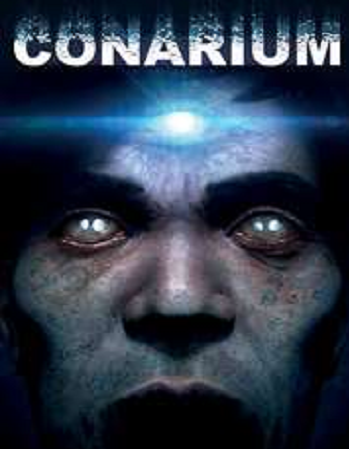 All life is only a set of pictures in the brain, among which there is no difference betwixt those born of real things and those of inward dreamings.
The opening quote, by H. P. Lovecraft
Conarium is a horror-themed first-person Adventure Game, created in Unreal Engine 4 by the Turkish developer Zoetrope Interactive and published by Iceberg Interactive for PC through Steam on June 6th, 2017. It was then ported for PS4 and Xbox One on February 12th, 2019, and was also given away on the Epic Games Store later that year.
Advertisement:

The game takes place in the Cthulhu Mythos of H. P. Lovecraft, where it essentially acts as an unofficial sequel to At the Mountains of Madness. The protagonist, Frank Gilman, is a researcher in an Antarctic base named Upuaut, which was set up by Dr. Faust sometime in The '50s after he analyzed the records of William Dyer's expedition. There, he created the Conarium device (named after an oft-used term for a pineal gland), which is worn on all the researchers' left hands and allows them to briefly peer beyond the veil through their pineal glands when they go into an altered state of consciousness through consuming a brew of D'versahe, a psychoactive plant from the prehistoric period. Only some researchers participate in this however; the rest are there to explicitly retrace the steps of Dyer's journey, as Faust believes they can venture far beyond their predecessors and succeed where they failed.

Of course, such hubris lead to nothing good, and so, Frank awakens one day in the Upuaut Meeting Room to find that the power is gone, and so is everyone else in the station. A snowstorm prevents him from escaping the station, and so he is eventually forced to venture into the half-flooded caves deep below the base, where no-one had walked for millennia until the ruinous arrival of Faust and his inner circle...

Compare to Call Of Cthulhu: Dark Corners Of The Earth and Call of Cthulhu: The Official Video Game. See also Stygian: Reign of the Old Ones for another late-2010s Turkish game set in the Lovecraft mythos.