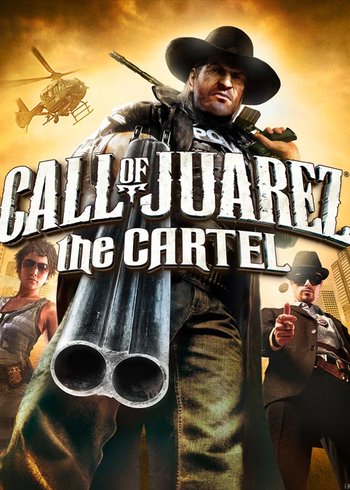 Ben McCall is about to shoot you.
"Times have changed since the Old West—yet nothing has changed. Where once men fought over gold, now they kill for money, drugs, and guns. There is a fine line between upholding the law and being ABOVE the law. The cartels are the new outlaws—they said an army of good cops couldn't take them down... so I said, why not send in a few BAD cops?"
"Welcome to the New Wild West."
— Ben McCall, Call of Juarez: The Cartel trailer
Advertisement:

Less a sequel and more of a Spiritual Successor to Call of Juarez and Call of Juarez: Bound in Blood, The Cartel moves the setting into the modern day and criminal underdealings in Mexico and East LA. The new protagonists are Ben McCall, a Cowboy Cop from LA and great-grandson of Billy Candle; Kim Evans, a tough Action Girl from the FBI; and Eddie Guerra, a Card Sharp working for the DEA. They investigate a terrorist attack orchestrated by the eponymous drug cartel and kick a lot of ass. Features the Co-Op Multiplayer mode that the previous title strangely lacked, allowing teams to control up to all three characters at once.

Techland were not happy with how this game turned out and had it removed from all online distribution, including Steam, possibly in order to make people think that this game never happened.