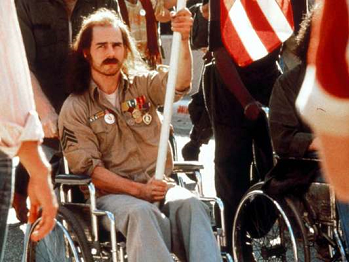 "Thinking about Vietnam once in a while, in a crazy kind of way, I wish that just for awhile I could be there. And then be transported back. Maybe just to be there so I'd wish I was back here again."
— Anonymous U.S. Serviceman, quoted in "Nam" by Mark Baker
Advertisement:

The Vietnam War was one of the most controversial wars fought in American history. The conflict resulted in many veterans coming back shell-shocked and to a country that didn't always support them. Since this is such a large aspect in American society, many creators have factored it into their works.

The trope has different forms. In the most mild version of this trope, the character is simply just a veteran of the war. Little is brought up about it, save for perhaps a Very Special Episode on PTSD, Veterans Day, Memorial Day, or small references throughout the work.

In other instances, their service can be a major feature of the plot. Perhaps because of troubles after the war, they are working dead-end jobs, or perhaps even homeless, with the horrors of war causing them to be isolated from society.

Shell-Shocked Veteran exists for every conflict and event in history but it was with the Vietnam War that became the Trope Codifier in American culture (for Europeans, this was World War I). One reason for the wide prevelance and representation of tropes dealing with this particular war, and the American soldier's experiences with this war, is that it coincided with the counterculture of The '60s and several left-wing movements which framed the events of the Vietnam War in a context greater than that percieved by generals and policymakers. It was also a widely televised war so the impact of the images often had an impact disproportionate to the events that were happening on the ground. It was also the first instance, in American culture, of the unpopularity of a war entering the mainstream. Dissenters of earlier military interventions (such as the Mexican-American War) did exist but they were relatively marginal. The experience of the Vietnam veteran usually revolves around Broken Pedestal and disillusionment, they had signed up for what they believed was a worthy cause, only to later believe that it was a war with misguided motives, with their sacrifices seen as, somehow, less heroic than that of earlier wars, and finally they turn their anger at the government.

As can be seen in several of the examples below, any Vietnam vet character still around in the 21st century will be old and likely retired from service and any works made during and after it use this term as a short-hand for "experienced badass" (although how much of that badassery will truly become useful to the plot changes from work to work). Some characters who were at one time depicted as serving in Vietnam have had that element toned down via Comic-Book Time.