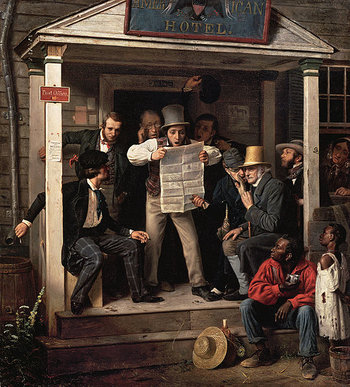 War News from Mexico (1848) by Richard Caton Woodville Sr.
"Manifest Destiny was a slogan popular in the 1840s. It was used by people who claimed it was God's will for the U.S. to expand all the way to the Pacific Ocean. These people did not include many Mexicans."
— Daria Morgendorffer, Daria
Advertisement:

Lasting from 1846-1848, the Mexican American War was fought between the United States and Mexico over a small land dispute in Texas, eventually resulting in the invasion of Mexico and the seizing of half that nation's territory. Though the war is seldom depicted in contemporary media, both the United States and Mexico as we know them exist, in part, as a result of this war.

The year is 1846. The Southern United States' plantation economy is becoming less and less practical as Europe gets more of its cotton from other sources, particularly India and to a lesser extent Egypt. Industry is driving more and more people north, and the balance between free and slave states is rapidly shifting. This only increases when the Oregon Territory is annexed. Meanwhile, European powers are developing spheres of influence in China, and the US government finds itself in need of a large Pacific port. There's a big one in the Mexican province of Alta California, which everyone knows is much more valuable than the newly-annexed Texas, which Mexico is still claiming as its own. In addition, tensions with Britain are flaring up, and American expansionists move to thwart any British interest in California. The answer to all of these problems: build a railroad from New Orleans to the Pacific coast, where many American expatriates already live, and open up that land for American settlement and control. But the land in between is in the hands of a hostile Mexican government...

In 1845, President James K. Polk had sent troops to the Nueces Strip, a minor, almost insignificant land claim on the Texan border with Mexico. Mexican troops attacked the U.S. force in 1846, giving the United States an excuse to declare war shortly afterward.

Going to war was a major point of contention in the United States. Many Democrats (particularly in the South) supported the war, hoping that the new territorial additions would be slave-holding, while most Whigs and anti-slavery elements (including some guy named Abraham Lincoln) opposed it. A number of notable artists who opposed the war included Henry David Thoreau note He refused to pay taxes in protest of this war, which led to his imprisonment (he was bailed out by his aunt much to his frustration). This would lead him to develop his belief in and practice of Civil Disobedience, which became the template for later movement leaders such as Mahatma Gandhi and the Reverend Martin Luther King. and Ralph Waldo Emerson.

American forces quickly secured the northern Mexican territories in what is now modern California and New Mexico, while at sea, the US Navy blockaded both coasts of Mexico. From there, they advanced into what is today northern Mexico, ultimately capturing Mexico City. With the loss of many of its major cities, and facing internal strife as well, Mexico had no choice but to negotiate after two years of mostly one-sided conflict. The Treaty of Guadalupe Hidalgo gave the US a large area of former Mexican territory consisting of California and many of the modern-day southwest states and established the Rio Grande as the border between Texas and Mexico. The modern border wouldn't be finalized until the Gadsden Purchase a decade later, when the U.S. again expanded its claims to include the southern parts of modern Arizona and New Mexico (which Mexico prudently decided to sell rather than risk another war).

The war was one of the most important events of both American and Mexican history and, by extension, the history of the world. In total (counting Texas, which Mexico didn't recognize as independent until after the war's end), Mexico lost over half of its territorial claims to the United States in less than two decades. Today, over ninety million people live in that territory, which covers close to 900,000 square miles. That's one-fourth of the current American population and ~70% of Mexico's current population. The value of that territory is even more striking. The economy of California alone is currently twice the size of the entirety of Mexico's; Texas also far outstrips it just by itself. One could hardly imagine the United States' culture today without Texas cowboys, Hollywood movies, Las Vegas casinos, etc.; TV Tropes would certainly look quite different.

The war also disrupted the lives of Mexican citizens who lived in northern Mexico (now the southwest United States), though not to the degree one might expect... at first. Those who had lived in the region for years were granted U.S. citizenship and permitted to keep their land, and Mexicans traversed the border more or less freely for many years in search of work and connection to family and friends in the North. As American settlers poured into the region in subsequent decades, however, Hispanic citizens faced increased discrimination, and the border became increasingly monitored and closed off to migration. Needless to say, many Mexicans dream of What Could Have Been for their country if not for this devastating war, and many still dream of a future where it's back in their hands.

Notably, the war was a major factor in the eventual outbreak of the American Civil War, which is much more popular in contemporary American media. While disagreements over slavery and states' rights stretched all the way back to the founding of the United States, they really got volatile after the Mexican Cession suddenly left the country with huge tracts of newly acquired Mexican territory. With the United States steadily getting bigger, Northern abolitionists suddenly had a lot more reason to fear the expansion of slavery, while pro-slavery Southerners had a lot more reason to fight for the expansion of slavery. Most of the Civil War's military generals, including Union general Ulysses S. Grant and his Confederate counterpart Robert E. Lee, learned military strategy from their experience in this conflict.

Despite the war's incredible impact on history, it is very underrepresented in popular media. Why is that? For one, it wasn't a very long war, nor an extremely active or deadly one by modern standards; the highest estimates place the total casualties at around 50,000, with the vast majority being from unglamorous causes like disease, making it not a particularly exciting conflict. Second, there's the uncomfortable Grey-and-Grey Morality of the whole war that Hollywood (literally located on territory from the Mexican Cession) has never been comfortable with tackling. The war was one of the most dramatic "right-of-conquest" land grabs ever, something that flies in the face of America's preferred image as a democratic and liberationist nation (hence why so many Americans opposed it in the first place). Mexico likewise doesn't make too much media about it, in part because it was such a Curb-Stomp Battle and in part because their claim to the land wasn't all that strong to begin with. Outside of parts of California, the territory that traded hands was sparsely settled by Mexicans or Americans, but it was pretty heavily settled by Native Americans, most notably the Comanche, whose de facto control of much of the region was almost unaffected by the war for at least a few more decades.