Film / The Legend of Zorro 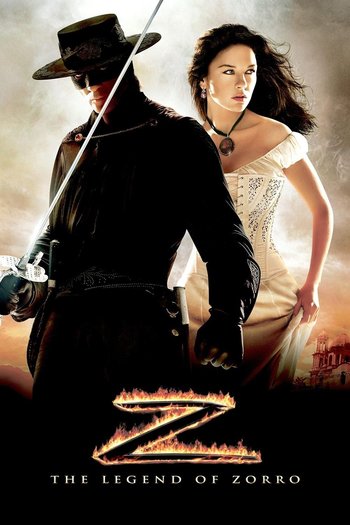 "It seems we have a fly in the ointment... or should I say a fox? Zorro."
— Jacob McGivens
Advertisement:

The Legend of Zorro is a 2005 swashbuckler film and the sequel to The Mask of Zorro. Like the first, it was directed by Martin Campbell and stars Antonio Banderas and Catherine Zeta-Jones.

Ten years after the last film's events, the demands on Zorro are putting a strain on Alejandro and Elena's marriage, so they have a temporary trial separation. Meanwhile, a new Smug Snake (Rufus Sewell) has entered the scene with eyes on both Elena and California, whose impending statehood is imperiled when Alejandro uncovers yet another conspiracy to carve the state and hand it over to various baddies. Cue a desperate battle on multiple fronts to win the day and the girl.