Film / Legion of the Dead 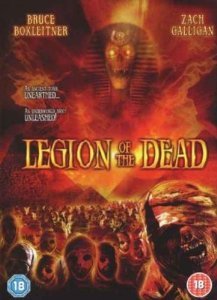 Legion of the Dead is a 2005 horror film from The Asylum.

A group of archaeology grad students have stumbled upon the discovery of a lifetime: An ancient Egyptian tomb in Southern California! However, not all is as it seems. You see, in this tomb lies an exiled high priestess who worshipped a God of Evil. Due to a curse, this priestess is awakened and goes on a quest to Take Over the World.