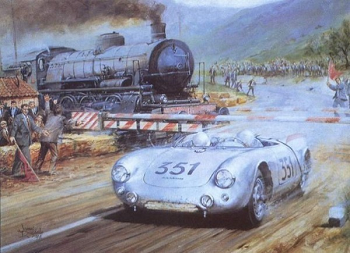 "He saw the train
And tried to duck it
Kicked first the gas
And then the bucket"
— Burma-Shave
Advertisement:

Since the invention of rail transportation, manufacturers have always strived to make train engines faster and faster. Near the beginning of the 20th century it was already sort of common to see locomotives capable of doing 150 km/h, and in 2016 it's perfectly normal to ride a train that does at least 300 km/h

like the Japanese Shinkansen or the French TGV. Now then, suppose you've got a speedster... let's call him Steve. There are many ways you can show off a character's powers — guys with Super Strength can lift buses, gals with Flight can jump off tall buildings and not plummet to their deaths, guys with Heart can... uh... that's not important. But what can good ol' Steve Speedster do? Race the fastest train of his time, that's what!

Basically, someone shows off how fast they (or their Pimped-Out Car) are by running parallel to, or if they're particularly cocky, in front of a train. It goes without saying that this is a terrible, horrible, no-good, very bad idea in Real Life. Trains are heavier than you, they're most likely faster than you, and they have so much momentum that it can take them miles to come to a full stop. Even if the operator sees an obstruction (like some idiot trying to beat the train to the crossing), he cannot prevent the train from hitting the obstacle and will most likely end up completely pulverizing it in the process, while the train suffers little damage, if any at all. Needless to say, if an idiot attempts to do this... and winds up dead, they will get nothing more for their trouble than a Darwin Award nomination for their stupidity.