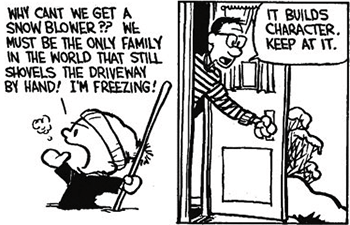 It also saves Calvin's dad some money.
"Not only so, but we also glory in our sufferings, because we know that suffering produces perseverance; perseverance, character; and character, hope."
— St. Paul, Romans 5:3-4 (New International Version Bible)
Advertisement:

"Misery Builds Character" is a Stock Aesop and Stock Phrase implying that unpleasant, distasteful activities and events are supposedly good. The suffering that the subject goes through is believed to help their personal and spiritual development, though often in a vague, unspecified manner (not always clear what "character" is supposed to be or represent). Synonymous with "A little suffering is good for the soul," or as Kelly Clarkson puts it, "what doesn't kill you makes you stronger" — which in turn was based on a tenet of Friedrich Nietzsche's philosophy. When done right, this trope proves that someone can grow and mature once they've had their share of humble pie or have suffered enough to move themselves in a more positive direction. If done wrong, the trope can imply that one can only become a better person through suffering, rather than building character on good deeds.

This message is often delivered by a parent (or Parental Substitute) to a Bratty Half-Pint as part of some instructions or admonitions. If the addressee is a Mouthy Kid or Little Miss Snarker, a sarcastic response is all but inevitable, especially if the parent is only doing it to be patronizing. The parent may claim that they used to face the same or worse kinds of tribulations and came out of it "developed", as well as deny that it affected them negatively.

Of course, this trope is not limited to children, and the phrase can be used between adults as well.

When this trope is applied to creativity, compare True Art Is Angsty: the idea that art based on misery — that causes the artist suffering, is inspired by someone else's ordeal, or induces pain in the audience — is automatically better than happier art. When applied to a religion or ideology, compare Martyrdom Culture: the idea that suffering is the most righteous thing of all.

Often a case of Truth in Television, in part because having the willpower to push through something hellish and come out on the other side makes you a stronger person. A form of Necessary Fail. Related to A Lesson in Defeat, Training from Hell, The Spartan Way, Because You Can Cope, and Had to Be Sharp. Can also be invoked by the Drill Sergeant Nasty, If It Tastes Bad, It Must Be Good for You, Teach Him Anger, Mistakes Are Not the End of the World, and When I Was Your Age....

See also Enemies Equals Greatness if having enemies or detractors makes a character strong. Contrast with Freudian Excuse, where misery had made a person worse.

Please, do not mistake for Stephen King's book, that... goes a little too far from this.

Before we go into the examples, please understand that, much like the biblical passage abovenote And the rest of The Bible, for that matter this trope is very divisive. While some people may subscribe to this idea, it generally holds that no one should have to go through any unpleasant, distasteful activities in the first place, especially since misery just builds even more misery for some people. Furthermore, trying to invoke this trope on another person, or group of people, can (and sometimes does) backfire horribly, in both directions.

What Stan Think's of Dipper

Stan claims the reason he's so rough on Dipper is that he's trying to toughen him up, citing the boxing lessons his own dad made him take as a child as an example

What Stan Think's of Dipper

Stan claims the reason he's so rough on Dipper is that he's trying to toughen him up, citing the boxing lessons his own dad made him take as a child as an example